What Would You Do? Take AIG’s Money or Not?

Blog - Latest News
You are here: Home1 / What Would You Do? Take AIG’s Money or Not?

The Washington Post reported that AIG went through with a convention for their top earners.

Lawmakers fumed last week when they learned that the company paid $440,000 for a week-long resort retreat in California for top-performing insurance agents. The expenditure occurred just days after Sept. 16, when the government announced its $85 billion loan. This month, as AIG asked for an additional $38 billion in taxpayer financing, top AIG executives spent thousands on a hunting trip in England.

I cannot help to think that they must have had one speaker for that event.  Reward trips

often hire motivational speakers and humorists…so it certainly is possible that one was hired for this event.

So the big ethics question for you is:

Imagine YOU were hired by AIG.  You see them go out of business…and be rescued with $85 Billion taxpayer dollars.  You know now that you are no longer being paid by AIG, but the taxpayers via AIG.   Would you take the job?

Theoretically you’ve had this keynote on the books for some time, you have turned down other clients who wanted to hire you as a motivational speaker, and because you’ve done everything you have been asked to do, you deserve the fee for you speakers services.

But now that it’s a taxpayer nightmare and Wall Street scandal, would you take the job?

Can You Read This? (Meeting Warm Up)

Happiness in Detroit: Lessons from a Shuttle Bus Driver

How to Be a Motivational Speaker (Part 2) 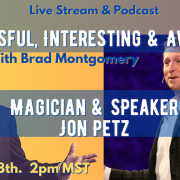 Do You Want to be a Swirling Vortex of Negative Energy?
0 replies

How to Make Your Kids Crazy on HalloweenWelcome to the Big Top!
Scroll to top Scroll to top