Magician Who Is A Teacher

I was recently speaking to a group of amazing high school students with the Skills USA organization when I happened to meet up with an old friend, Colorado Magician Michael Townsend.  (We’ve been friends for ages, are both members of the Mile High Magicians Society.) 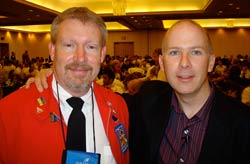 Mike is a great guy, and definitely a top Colorado Magician.   I’ve seen him perform. (You should see this guy with a deck of cards.)

But check out what Michael told me about how he uses his magician skills in his role as a teacher: he uses his magic to “bribe” his students to get their work done. Which is a win / win for everybody.

But more than that, he uses his magician skills to connect with his students in a way that wouldn’t be possible otherwise. His students respect and admire him. And because of that, they are more willing and able to learn from him. We all know that the best teachers:

• Know their stuff.
• Are able to communicate
…. and, perhaps most importantly,
• Have a connection to their students

And what’s so cool about my magician pal Michael is that he makes sure he knows his stuff and is a good communicator. But, thanks to his magic “chops,” he is able to connect like very few other teachers.

I’m glad to be a magician. But mostly I’m proud to know magicians like Michael. Way to go brother!

Can You Read This? (Meeting Warm Up)How Do You Become a Comedian?
Scroll to top Scroll to top