Tag Archive for: how to get a job

SHOW Them Why You’re the ONE for the Job–Put on your Creative Pants!

Every small company at some point is looking to hire office help. Here’s my story, and the

lessons I learned. I put an ad on my local Craigslist for office help. In the ad I required applicants to send both a resume and a writing sample.

Anybody who sent both documents was automatically moved to the next round of consideration. We never even opened the files. The next round included a very lengthy questionnaire… We’re talking a total pain in the neck… The return e-mail was simply signed by my assistant with our web address. There were no other comments besides congratulating them for making the second round and asking them to fill in the questionnaire.

One of the questions, hidden in the middle of about forty others, was, “Tell us what you know about our founder.” Anybody who either failed to return the questionnaire, or failed to actually look up the website and read all of the details about the “founder,” was eliminated. Besides quickly skimming for the answer to that question, we didn’t give the lengthy questionnaire a single look.

Okay, I admit it. We basically made applying for this job an absolute pain in the neck. Question after question, a hidden website, hoops to jump through.

The goal was to weed out applicants who weren’t that curious, who could not follow details, or showed no ability to find and take advantage of an obvious hint.

But in many ways we failed. We had to cut off applicants after only eight days. We were completely inundated with people who made it past the second hurdle.  Maybe 75 or 80 applicants.

Our goal was to have a small handful of very driven applicants. We were totally surprised to look in the folder of people who made it to the finals and realize there were 30 people there. [ However when you consider that over “400” people applied, that’s a pretty small percentage. ]

That’s a long story, but it comes with a pretty good point.

Imagine yourself looking in a folder of 30 applicant resumes; applicants you 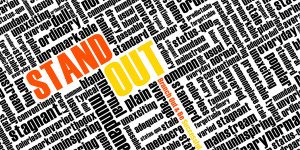 know spent a significant amount of time going through a difficult process to get there. Imagine knowing that you had to open all of their resumes, their questionnaires, and their second set of questionnaires. What do you see in your mind? I can tell you what I saw here in the office: I saw 30 applicants who looked nearly alike on paper. Not a single one of them stood out.

What did I learn? I learned that if you want to stand out you’re going to have to do more than make sure that your resume doesn’t have any typos, that your writing sample has good grammar, and that you follow the directions. I learned that standing out takes a little bit of creativity… Though not much.

Here is what did NOT happen:

So what did I want, you ask? I wanted courage, passion, energy, ambition and creativity. Not much, eh?

After watching the application process from this side of the desk, here is what I would have done to stand out. (Pick any or all of these ideas… Assuming it’s a job you really want.)

I would absolutely call. Even if it was just to say, “I sent in the required info but wanted to see if there was anything I could do to make my application stand out.”

(By the way, if the application said no calls I would ignore it.)

How about sending a video? Add it to your e-mail along with your resume and writing sample, and make it professional, courteous and short. Who could resist opening it?

Consider applying twice. You could apply once in a very formal way with your given name. Then you could apply again in a more creative way using your middle name. If the employer ever asked you about it, I would simply point out that I really want this job. I would ask the employer if anybody else had tried as hard as I tried to get this job and if that fact said anything about me.

I would work Google as hard as I could to find out details about the company. I would send an email to the president, to the president of HR, to anybody I think might listen. I would tell them that I am very eager to work with them, that I have started the application process, but that I am eager to show them that I’m willing to go the extra mile… Even to the point of writing the president. Heck, I might even send roses.

I would print out everything I had emailed, put it in a very nice envelope, and mail it old-school style to the person in charge. I might put a quick handwritten note on the cover page saying that I really wanted this job and thought that using an old fashion envelope might earn an extra look.

If possible, I would hand-deliver this letter, and work hard to get past the gatekeepers in order to put it in the hands of the person making the decisions. If I was unable to get past the gatekeeper, I would tell them why I was there, that I was trying to get my application to stand out, and beg them to let the decision-maker know that I was there in person.

I would use special formatting on my resume and all other documents. I might work with – or even hire – an artist to make it even more special. I would avoid boring colors and fonts. My paperwork would look professional and pleasing to the eye, but it would different.

In other words, I would work hard to stand out. I would do exactly what they required, and then take it up as many levels as I could. I would use the phone, snail mail, and in-person appearances (in combination or all three), regardless of whether or not they discourage these practices.

Of course, you must follow the instructions (except for the no calls one). I am amazed how many people were eliminated easily and quickly for not following the directions.

And of course, part two, make sure your resume, writing sample, whatever, is grammar perfect, spelling perfect, in every way perfect. That’s such an easy way for a potential employer to eliminate candidates. And if you get 400 resumes flooding your in-box, you’re looking for a way to eliminate some.

When looking for a job, pull on your creativity pants and wear them to the next level. Anybody can send in a resume or writing sample. And you’re not anybody. You’re the best person for the job. Now, show them why!