Fees: Saving Money On A Speaker

Blog - Latest News
You are here: Home1 / Fees: Saving Money On A Speaker 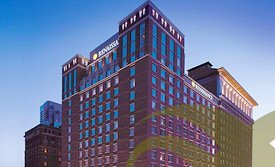 On a recent trip to St. Louis were I spoke to the Air Force, my client came up with a brilliant idea. It was so good I’d love to claim credit, but he reads my blog and he’d rat me out.

My speakers fees were greater than the budget for this particular military event. What to do? My client got creative, thought outside of the Budget Box and teamed up with his host hotel. He had hundreds of Airmen staying at the Renaissance Hotel in St. Louis, Missouri. Between the meeting rooms, the hotel rooms, and all of the related expenses (room service, restaurant and coffee shop purchases, etc) he was a BIG client for the hotel.

He suggested to his hotel client that they partner with him, and have me speak to the hotel staff on the same day that I spoke to his military group.  I was speaking to the Air Force after lunch. My meeting planner knew that I’d fly into Missouri the night before… and would be free in the morning.

So he suggested that I speak to the hotel staff in the morning, and then work for him after lunch.

Bottom line: it worked perfectly. The hotel had an All-Manager meeting. They

brought in all of the top folks from all of their departments from the Starbucks kiosk in the lobby to housekeeping to front desk to maintenance to the kitchens.

I worked ahead of time with some of their people so that, (as I do with all my clients,) I could come in prepared to speak to THIS particular audience.

[It was a special event; the hotel industry has been hammered, and this hotel, like so many others, recently went though some deep layoffs. The staff was in shock, scared, and nervous. The CEO gave them a sort of “State of the Business” speech which was both totally cool, and a bit scary. The news wasn’t great. And then I was tasked with putting that bad news back into perspective and help them figure a way to work their morale (and fun quotient) back up to healthy and productive levels.]

And I was thrilled because I got to work with two awesome groups, enjoy St. Louis, and work with with a fun and creative meeting planner who had an awesome idea.

What’s my point? Are you short of money? Looking to hire a Top Shelf speaker but are suffering with a reduced budget? Consider partnering with your hotel. If the Air Force was smart enough to figure it out, the rest of us ought to be smart enough to “borrow” their concept.

(Hey Bruce… I know you’re reading this. Thanks for the killer idea, and for making it happen.)

Are you looking for a motivational speaker? Go to the contact page now! (And we can talk about partnering with your hotel if you like.)

Yours,
Brad Montgomery
Missouri Motivational Speaker, Military Speaker, Hotel Speaker (All in One!)

Boeing Likes Me! (But still no Space Station)
Most Expensive Keynote Speech Ever
Military Speaker | Motivation at Scott Air Force Base
Care To Barter for a Motivational Speech?
4 replies