Dirty Jokes are for Kids!

Blog - Latest News
You are here: Home1 / Dirty Jokes are for Kids!

Not at my house. But recenlty I learned that the spoken word CAN be “Family Friendly!”

When I was younger (and not yet a motivational speaker– heck, I wasn’t even a fireman which was my first goal) I spent a great deal of time in a little house in Silver Plume, Colorado. There was no T.V. up there to distract me and my sister and brother. Instead, we found entertainment in four or five Bill Cosby comedy albums my mom and dad bought. We laughed tons and tons as we listened to the albums over and over again. We could have recited the entire albums– and probably did.

Years later, to my delight, my dad gave me the very albums that had been such an escape many years ago. After some trial and error, I finally figured out how to hook up the record player to my computer and copy these albums onto CD so they would last — with the same scratches and grooves for many, many years to come.

The best surprise I got out of doing this though was that my kids love these comedy albums just as much as I did as a kid. We can listen to it together and they love it! I love the comedy recordings now as much as ever for three reasons. 1. They are old friends and listening to them is like a hug from a friend you thought you lost. 2. They are hilarious! Cosby’s stuff really holds up. And 3. It’s a hoot to listen to them with my kids. It is really special to be able to share humor like this across the generations.

Even after all the years of being a comedian, I never thought it was truly possible to have family-appropriate humor that would really be enjoyed by everyone. Of course I had done many shows aimed toward the family that included magic, but Cosby serves as such a great example of how the spoken word alone can be very funny to audiences of all ages without being inappropriate. (Can you imagine encouraging your six year old kid to listen to Chris Rock?) Family Friendly comedy? How Cool is That?!

[Yup… I have a family friendly corporate comedian and magician show too! Learn more here.)

Flash Mob for Hire! (Comes with a Motivational Speaker?)

We Can’t Afford A Top Motivational Speaker. What Next?

Clean it up, Sonny! Wash that mouth out with soap and water! 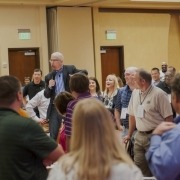 Motivational Speaker is Back on the Road! Brad’s VLOG

Is Mediocrity Your (Accidental) Goal?

Humor in Bed? Honey don’t laugh!Pick a magician. Any magician
Scroll to top Scroll to top