Ok, not totally.Â  But wait until you read this true story:

I was recently at a huge event in Florida â€” 450 professionals brought in from around the country – to be their closing motivational keynote speaker.Â  Nice.Â  They asked me to include all expenses in my contract to make it easier for them.Â  Fine.Â  No sweat. Â  Â (Can you tell that I’m leaving even the industry off to make sure I don’t step on any client toes? :)

My spot as the closing speaker was immediately following a boxed lunch.Â  After the 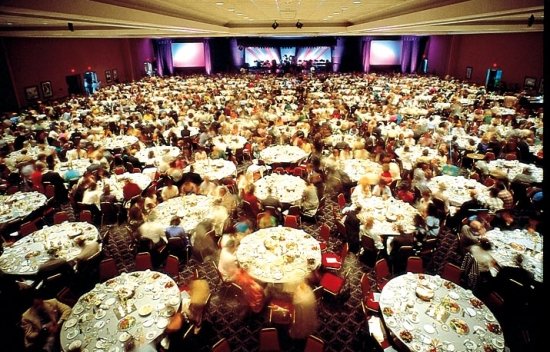 morning session, the attendees grabbed a box lunch, went to their seats, ate… and waited for – well – me.

I got my gear set, was all-systems-go with the audio visual team, and had chatted with the big boss (who by the way had hired me two times in the past.)Â  So far, everything is easy and fun.

But here is where it gets hinky.Â  I was about to grab a box lunch… I was starving and was needed calories before I spoke for an hour and a halfÂ  … when I casually askedÂ  the meeting planner if I could have a sandwich.Â  I asked her knowing it was a formality.Â  Of course she would feed her speaker. Â  I nearly didn’t ask. Â Â

“No, we have accounted for all of the lunches, and they are for the registered attendees only.”Â  I was dumbfounded.Â  I wanted to say, “Well then I’d like to register.”Â  But all I could come up with was a clumsy, “But I’m your closing speaker.” Â

“Sorry,” she said.Â  I was amazed.Â  With 450 people there, there just HAD to be ONE extra turkey sandwich.Â  And did she realize what it meant to me and her meeting to turn me down?

So I just said, “Ok, I’ll need to go get some food.” I left her and 4 tables piled high with ready-made lunches and left in search of a quick sandwich.Â  There were two restarurants in the hotel, but after talking to their hostesses it was clear that I wouldn’t have time to order there.Â  I eventually ended up at sandwich place next to the hotel and bought myself a â€” you guessed it â€” Â turkey sandwich.Â  (Ironic, no?)

By the time I found this place, ordered, waited, wolfed down the sandwich, and made my way back

Â to the convention area the meeting planner was in a panic. “Where were you?”Â  Again, I was dumbstruck.Â  I didn’t have anything graceful to say, so I just came out with a, “I had to go find some food.”

She looked surprised. Â Apparently her other speakers never need fuel before they speak. Â We walked back towards the meeting room and passed what was now a single table piled high with turkey sandwich box lunches.Â  She saw me look at them:Â  “I guess there were some left after all.”

I was silent. Â  But inside I was somewhere between laughing and crying.Â

What’s the point?Â  I can tell you it isn’t the $8.67 I spent on my sandwich.Â  My point is that this woman was responsible for an event that cost a gazillion dollars and she threw her keynote speaker off-balance because of a turkey sandwich.Â  I didn’t care about the money, I cared that because she was counting her pennies I wasÂ inconvenienced, and because of that I wasn’t fully in the game. Â Instead of eating with the attendees, getting the latest scoop on the convention, and having a chance to go over my program notes I was rushing around trying to find calories that were within reach the whole time. Â Maddening.Â

Normally I eat with my audience because that’s where I get the last-minute scuttlebutt.Â  That’s where I hear about the most recent stresses, the talk of the meeting or convention, and that’s where I often write some of my best jokes. Â Not this time.Â

Instead of getting myself psyched up for doing a good job for her, I was trying to make it back to the hotel on time.

More irony: Â The meeting planner was off balance, nervous and upset because her speaker had vanished. Â  Both of us â€” and the entire audience â€” would have been better served if I was given a sandwich.

[Hey, don’t worry. Â The keynote was fun and well-received â€” if I do say so myself.Â  It was a great audience and I’ve done this keynote thing a bunch.Â  It went great.Â  But why in the world did this planner make it so hard?]

Message to meeting planners:Â  if you are hiring a speaker, do your best to set them at ease.Â  You don’t have to pamper us, (though we love that more than you’ll guess) but it is a good investment to remove as many headaches for us as you can.Â  You want us to be 100% when we hit your platform.Â  So make it easy for us to rock.Â  Oh, and by the way, buy us that sandwich.

Are you looking to HIRE Â a keynote speaker? Â Contact me here. (I’ll even bring my own sandwich…just give me warning. :)

PS. Â I asked my client Â â€” not the meeting planner but the client â€” if I could tell this story from the stage. Â I gave him a brief summary, told him why I thought it was funny and how I thought that there was a lesson in this story for his specific group. Â He declined and admitted that it made sense but the meeting planner was “highly strung” and he didn’t think she could take it. Â Oh… telling that story from the stage would have been funny!

PPS. Â Ever had a similar experience? Â  Would you be so kind as to leave it in a comment?

Is Mediocrity Your (Accidental) Goal?

Hired A Motivational Speaker Last Year? Want to Pass This Year? Don’t do it!

Does Your Motivational Speaker Suck?

Is a Funny Business (or Motivational) Speaker A Bad Idea?

Illinois Probation! I Miss You!
9 replies