I’m just back from Farmington, New Mexico where I spoke to a wonderful group of staff at San Juan College.

It was an in-service day, and my job was to motivate this group of hard working staffers, give them a chance to turn into a stronger team, and to facilitate some creative ideas how to improve morale. San Juan has been through some tough times lately, and is dealing with change. My job was to help make work more fun…and in turn help this group be more productive.

It was a total blast. There were many highlights, but let’s go over a few:

This group started of ticked off that there was no coffee service in the morning. Ok, that was a bummer. But it became really funny because I teased them about it. And teased some more. Sure, it was a bummer to miss our coffee, but it was hardly the end of the world. We joked about it. We started laughing. A kind woman from the food service staff got me a cup of coffee. I gave it to Reid, a fun guy from the audience to pass out little “sips” to the people suffering the most from caffeine deficiency. It was a small thing that turned out great. And very, VERY funny.
I often teach people to lighten up their business meetings by putting out toys for the attendees to fiddle and fidget with. San Juan didn’t need me to tell them this…they had pipe cleaners and Play Doh on every table, plus some other toys. Check out some of these photos of some of the coolest creations.

But perhaps the biggest highlight came from the creative people in this San Juan College Audience. They were tasked with coming up with techniques or tactics they would actually implement

to make their office life more fun. They were challenged to come up with “to do” lists of what they personally would do differently based on our time together. Check out this awesome list of Humor in the Workplace ideas:

• Give candies to people who make you laugh. ( Keep ’em in your desk and give them away as reward.)

• Change ring tone on other people’s phone. The folks at San Juan College are able to set their own ring tones on their office phones. Some man snuck to a woman’s phone, and recored his own voice saying, “Are you there? Are you there?” This was her new ring tone!

• Artificial cheese “to go with your whine.” I LOVE this idea. They had some fake cheese they got at a craft shop (what in the heck anybody really needs fake cheese for I’ll never know) and they ceremoniously gave the cheese away to anybody who whines. This is wonderful.

• Create and use nicknames for co-workers. Loving and fun nicknames can make people feel good and push up the joy-quotient.

• Throw stress balls when at people who start to get to negative. 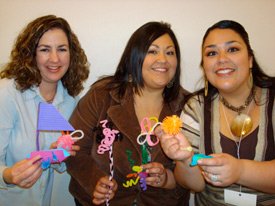 • Give a toy bomb to somebody who is “Da Bomb.”

• Send memos via air mail. (Fold them into paper airplane.)

• Throw marshmellows at co-workers for “no good reason.” I’d love to see the janitorial staff after a day of marshmallow fun!

• Give “mini-sized” box of Frosted Flakes to co-worker with note, “You are Great!”

• Combat grumpy people with love and kindness. (Wow…what a deep and wonderful idea.)

• Silly String At Work. (I’m tellin’ ya… I’ve done this. Silly String is cheap, cleans up easy, and is absolutely fun. You can NOT be miserable if you are spraying Silly String! Or having it sprayed at you. It’s a no brainer…go buy some now.)

• Change a co-workers screen saver. (How creative can you get? What could you do to make this really funny?)

• Make a contest that whoever whines the most has to buy the monthly lunch your team shares.

• Contest: the most whiny person has to take take the minutes at the next boring meeting.

• Use tape loops to tape your workmate’s telephone receiver to their phone. (So when they try to answer the phone they can’t “pick up.”
• Put a small piece of tape over the laser on the bottom of somebody’s mouse. It will simulate a broken mouse. (I love this idea because it is a totally victimless practical joke or prank.)
• Change the height of a workmate’s desk chair. Do this one time and it’s funny. Do this twelve times over the course of two weeks, it’s hilarious.

Hey San Juan! I dare you… Let Me Know What YOUR Highlight Was! Use the comment field to tell me about your “Ah Ha” for the day. I dare ya!

Thanks so much for having me. You make me feel like the luckiest

PS. Learn more about the seminars I did for San Juan here.