Oh For Crying Out Loud! Learn the Punchline, Sen. Kerry!

People will take the wrong lesson from this humor mis-cue:

Sen. John Kerry apologized for “a botched joke” about President Bush’s
Iraq policies that led Bush and Republicans to accuse him of insulting U.S. troops.

This stupid mis-telling of a joke has landed the Democrat in some hot water, and given the Republicans something to whine about besides their recent troubles.

“Of course I’m sorry about a botched joke. You think I love botched jokes? I mean, you know, it’s pretty stupid.”

I’ll say, Senator Forget-The-Punchline. Kerry told a recent audience of students that they might get “stuck in Iraq” if they don’t make it through the educational system. 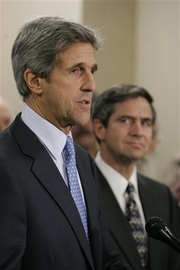 Kerry said he messed up the delivery of a joke aimed at Bush â€” according to aides, the punchline was originally written to say “you end up getting us stuck in a war in Iraq.”

As a comedian and an presentation skills instructor, this messed-up punchline makes me crazy. The lesson that most people will take from this humor-fiasco is that humor is dangerous and is best avoided. That conclusion is understandable, but is wrong.

This play-it-safe strategy is what leads to such boring candidates as Dukakis, Kerry, Gore, Dole, and Forbes. (Boring guys who lost; guys who do their best to squash any personality they might have and present a very cardboard construction of a pubic persona.)

Yet humor is a tool that, if practiced, can tremendously help political candidates (or anybody else looking to excel). Ronald Reagan’s most famous use of humor, where he joked of the “age issue” by promising “not to use his opponent’s youth and inexperience against him,” helped seal his election. In other words: use humor well, and you’ll get what you want. Improved bottom line performance, more sales, or… public office.

Yet I KNOW that what most people will take out of this botched Kerry joke is to not use humor at all. But avoiding humor is a mistake. Listen to Reagan. Listen to me. Humor works.

Want to learn how to safely use humor to help you get what you want in YOUR job? (Without ticking off your political party?) Learn more about my keynotes and seminars here.