Hey! This Magician is Funny! (And Corporate-Clean)

Magician Brad Montgomery is Your Answer.

The pressure’s on! This time, you need to book a sure-fire, can’t-miss entertainer, right? You gotta have a hit! Make your job a whole lot easier. Just book Brad. If you are looking for a corporate magician who is also a corporate comedian…. lucky you! You found him!

He dazzles ’em with Award-Winning magic. Baffling magic. Hey-how’d-he-do-that-magic. He cracks ’em up with boy-next-door humor. Clean humor. Spontaneous and impromptu humor. Audiences laugh and guffaw. His show calls for audience participation. Folks get involved. Turn him loose on the weary multitudes and before you know it, you’ll hear laughing and guffawing and the happy cry that talent bookers love to hear: “Hey, down in front!”

Brad has paid his dues. As they say in show biz, you don’t get invited to the Hot Spots if you ain’t been around the block at least once. Rookies don’t play the Magic Castle in L.A. Or the Mostly Magic Nightclub in New York City. Or for companies large and small coast-to-coast. But Brad’s done all that and more.

From Boardrooms to Banquet Rooms all across the country, businesses call on Brad to give their corporate proceedings a welcome lift. Gloom disappears. Quarterly forecasts brighten. Quotas are magically within reach. Suddenly, the world is a much better place. It happens whenever and wherever Brad steps on stage and says, “Watch closely!”

Audiences all over the country recognize seasoned comedic magicians when they see one, and that’s why they hoot and howl and clap and stomp when Brad performs. And why they ask him to come back and do it again year after year. Corporate Magicians? Just Book Brad

Brad has cracked-up and entertained thousands of groups including Kraft, USA Today, Miller Brewing, and the American Payroll Association. Call him today to find out why they keep bringing him back!

Corporate Magician Brad Montgomery customizes his presentation. Woven into his magic are quips about The Buzz around your Water Cooler. Your biggest competitor. The manager who wears those awful ties. Comments about the company golf tournament. The executive who is late for meetings. Brad’s shows are unique because your audience is unique.

If you crave a hilarious show packed with baffling mystery, and “gobs” of audience participation, a show that was built just for your audience, then you’ll love a hot steamy mug of Brad Montgomery’s Freshly Brewed Magic & Comedy. Make your life simple: Just Book Brad

“Brad could pick up on the attendees’ reactions better than any magician or comedian speaker I’ve ever seen. He is perceptive. Excellent — and very funny! — program.”
-Marla Ashley Missouri Child Support Enforcement

Who is this magician Brad Montgomery?

Most people who have seen Brad know him as a motivational business speaker.  But he got his start in magic… And lucky you he still does it.

Using his own blend of Hilarious Humor, as well as his Award-Winning magic, Brad reminds us that our lives are supposed to be fun and funny. Great for opening or closing the convention, or even for the after-dinner entertainment. “Because People Learn Best When They Are Laughing.”

Brad is a corporate comedy magician and magician keynote speaker? What does this mean? It means that some groups bring in Brad to entertain their groups with dazzling magic and comedy. Other groups ask Brad to be their Magician Keynote Speaker… a motivational speaker who illustrates life’s truths with magical illusions.

Brad loves to come in to do the opening keynote.  And then stay and do the after dinner entertainment that night.  His clients love him because his audiences love him.  (Oh…and by asking Brad to do both events they save BIG money.)

“Outstanding and hilarious.
The customization made it special.”
–USA Today 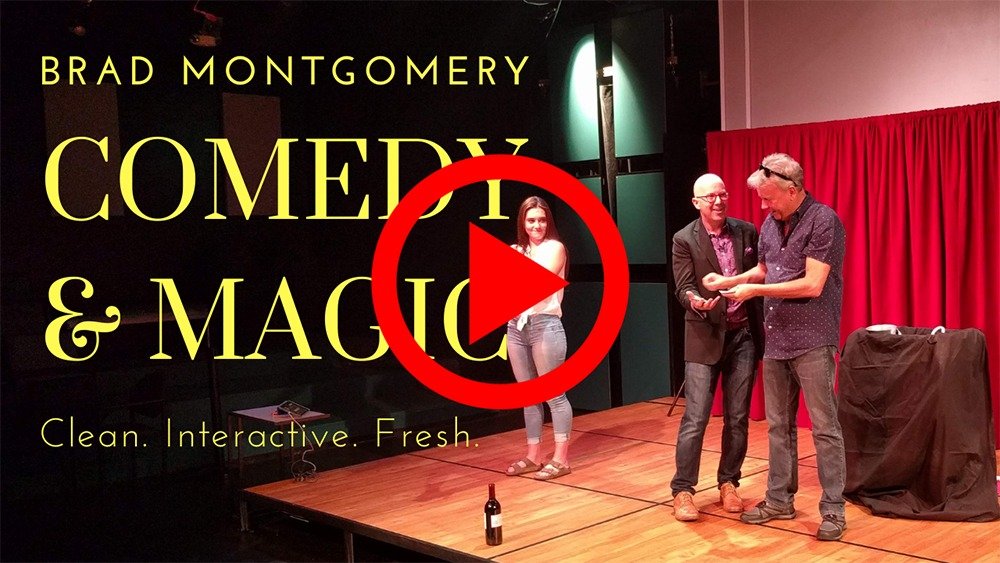 Brad Montgomery got his start as a magician, but now he is so much more.  Speaker, comedian, facilitator, author, and meeting energizer.   If you’re looking for a fresh take an an ancient performing art, and if you’re looking for somebody who will create an experience..more than a corporate magic show…then you need Brad Montgomery.  Give us a shout at our Contact Page.

Brad’s clients love Brad because with Brad’s background as a corporate magician and illusionist, he knows how to entertain; he knows how to hold a crowd. And because he is funny. Brad’s theory is that People Learn Best When They are Laughing. And through the amazing use of comedy, illusions, and magic Brad is truly a unique and special magician, speaker, comedian, and entertainer. Corporate magician, corporate comedian, keynotes, Breakouts, and Business Entertainment. Ready to book Brad? Go the the contact page.