Blog - Latest News
You are here: Home1 / REAL Motivational Speakers Hate Matt Foley & his Van Down By The ...

One of the most well-known motivational speakers doesn’t exist. 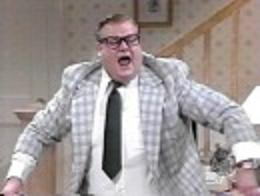 One of the most famous speakers in the world is a spoof character called Matt FoleyÂ created by Saturday Night Live and Chris Farley. Matt is a horrible motivational speaker; he clearly doesn’t have his own life together, is thrice divorced, and famously lives in a van Down By The River.

While attending the National Speakers Association meeting â€” a place where the best speakers in the world gather to network and learn â€” I decided to get my camera out and asked some of my peers what they thought about this fictional character. Do they feel threatened by Matt Foley? Â Insulted? Â Do they think it’s funny? Why is this fictional character famous years and years after the SNL episode was last aired? (Sadly, Chris Farley has since died.)

Check out the video here:

And our audiences know it. If there weren’t any blowhard, miserable, unsuccessful, poverty stricken, lame motivational speakers, the late night Chris Farley material would fall flat.

(By the way, when I’m part of an audience watching a motivational speaker I’m always curious about that speaker’s back story. I want to know if they’re doing well in the world and simply sharing their struggles and journey with us, or if they are a Matt Foley style fraud. Aren’t you?)

I was completely surprised there were so many professional motivational

speakers who don’t know about the Saturday Night Live sketch. They have never heard of the Down By The River dude. To me this shows a complete absence of awareness of American pop culture. Yes, to be honest, this sketch is pretty old. (Foley first appeared on SNL in 1993). Â But if we trust in Googleâ€¦ And who doesn’t?â€¦ Many people are still searching for information, video, and details about the fictional speaker. Â There are numerous YouTube posts of Matt Foley. Â And if they’re searching for it and posting him, that means there is â€” even now â€” a ton of interest in this fake speaker.

For me the message is clear: most Americans have doubts about 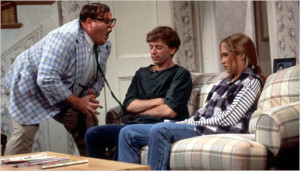 When I am watching a motivational speaker I don’t need them to be wildly successful. They do not need to have climbed a mountain, run a Fortune 500 company, or made a fortune from scratch. All I need is for them to be authentic, present a real person, and share with me actionable ideas about how to improve myself.

What do you think?

Is Matt Foley funny? Â Why? Â  What do you look for in a motivational speaker? Leave a comment below! Â We want to know what you think!

If you’re looking for a motivational speaker for your event who does not live down by the river that I hope you will consider booking me.

Here’s the first Down By The River Sketch:

What do YOU think?

Get Your People Out of Their Seats! They’ll Never Forget It! I Love Soccerâ€¦ And Why You Care
Scroll to top