Blog - Latest News
You are here: Home1 / Magicians Get Lucky

But not the way you think.

I was lucky to recently spend some time in Mexico 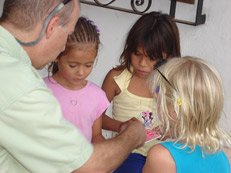 with my family. One of my absolute highlights of a killer fun trip was doing magic for some kids. Ok, one kid actually.

At one point I did some simple magic tricks for some kids. My daughter â€” the blondie in the picture â€” and two Mexican kids, one of whom was fairly well off, and the one who lived in a shack. (Seriously, I saw it… it was a shack. No plumbing, no door, hardly any space, and in the middle of what looked like a trashed out lot.)

Well, all three kids seemed to dig the magic tricks… it was one of those cool days where it is fun to be a magician. But there was something especially fun about working for this underprivileged little kid. I know for a fact that she doesn’t have a TV â€” so it isn’t like she has been seeing a ton of magician

David Blaine or David Copperfield. And â€” ok I’m guessing â€” but I’m pretty sure she wasn’t at any of her little friend’s birthday parties where they bring in a professional magician. In other words, I was one of the very few magicians this 5 or 6 year old kid had ever seen. Perhaps the only magician.

It was really cool. Sure, I love doing magic. And sure, I love doing it for kids. But doing some tricks for a kid who clearly was seeing something she perceived as special was a total blast.

But it also made me wonder how we as entertainers (and magicians in particular) are ever going to impress anybody in that same to-the-core way as the world becomes more technological, more youtube’d, and more connected in general. When anybody can order up any entertainment they want, are they still going to be impressed with (even the coolest) magic tricks? Or the most qualified magicians?

Check out my work as a magician motivational speaker here.

Pimped Out Toilet & Yoda Dog? What do they mean? I Hate My Job! (And you’re an idiot.)
Scroll to top