WHAT'S THE DEAL WITH DAVE CHAPPELLE And the Trans Community 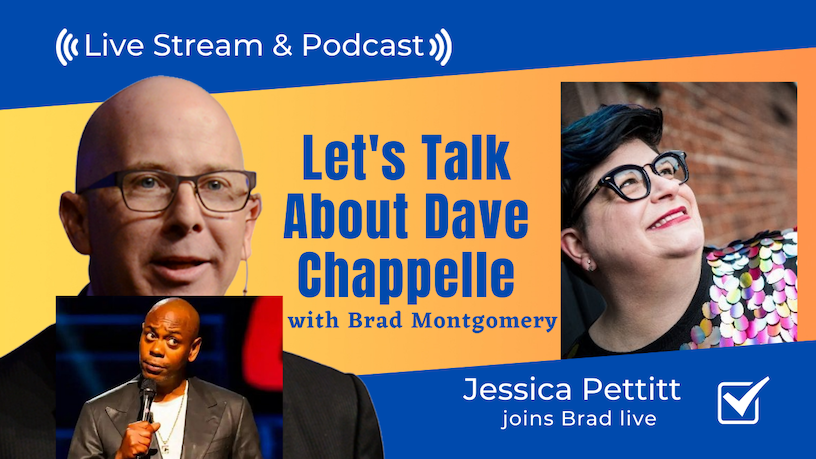 Have you ever felt like many things in your life came together in one single event? In many ways I felt like this happened in today’s podcast.

Over the past 24 months I’ve learned so much about marginalized populations. I’ve had endless conversations about race. I’ve talked with people more about gender, sexuality and nonconforming individuals over the past couple of years than I’ve done in my entire life. And because of the ME TOO movement, the contentious presidential election, George Floyd and more, I’ve learned more about sexual assault, white privilege and police violence in the past two years than I ever learned in all of college.

And that brings us to Dave Chappelle. If you keep up with pop culture, this segue makes sense to you. If not, stay with me and I’ll explain.

I absolutely love comedy. Not only do I do it for a living as part of my job as a funny motivational speaker, but I’m a student of comedy. I watch it. I listen to it. I study it. I’m fascinated by humor, jokes and stand up comedy. And in case you have been living under a rock, Dave Chappelle is one of the highest paid and popular comedians of our time.

Dave (I call him Dave) released his latest standup special on Netflix very recently. It got a lot of attention, and not just because it was for many people a funny show, but because it stirred up a boatload of controversy.  Dave specializes in controversy and shocking and offensive humor. He makes jokes about subjects that most of us consider taboo or too potentially offensive to touch with a ten foot laser pointer. Subjects like race. Like transgender people. The MeToo Movement. School shootings. He’ll make jokes or comments about issues most people wouldn’t consider funny. And he’ll get laughs. Dave Chappelle has proved over and over again that he somehow is able to cover very contentious issues and still rule the comedy scene. In my opinion, he’s able to somehow be both offensive and funny at the same time, and that’s fascinating to me. As a funny motivational speaker who works in the corporate world, I simply do not have the “luxury” to skewer any groups of people for any reason whatsoever.

Of course, lots of people disagree that Dave is funny at all, especially when he focuses on transgender issues in his shows.  His latest Netflix special, The Closer, and his prior one, Sticks and Stones, spend a lot of time on humor at the expense of the transgender community.  The trans community found his jokes to be blatantly offensive and hostile, and has protested his shows, organized walk-outs at Netflix, and generally made their displeasure apparent.

Can A Comedian Be Offensive & Funny at Once?

So is Dave Chappelle funny?  Can a comic speak about touchy subjects and still be humorous?  I mean, people have made jokes about Nazis and people laugh. So why can’t Dave Chappelle makes jokes about the trans community without catching a lot of backlash? I knew I wanted to talk about this topic on my podcast but needed a pro. I’m a middle-aged, straight white guy; what in the world could I possibly bring to this conversation?

Jess Pettitt is a friend of mine and generously agreed to be a guest on this podcast. Not only is she a comedian. Not only is she a diversity and inclusivity speaker and expert, but she has intimate and personal knowledge about people who are non-conforming, or transgender, and exist in at least one marginalized group. She has the experience I just do not have. And lucky us she agreed to help me understand what some of the fuss is about.

When I first watched The Closer and other of Chappelle’s comedy specials, I came away with the feeling that at the core of it, in my opinion, was a guy who wanted to expound on his observations of the world around us, kind of like a Mark Twain or Will Rogers. Like them, he uses comedy to point out the absurdity of life around us. I felt that the trans community was misunderstanding Chappelle’s comments and taking them out of the context of a comedy special; that he was trying explain his support of trans people living their best lives while also trying to get some laughs. I believed that what he really wanted us to understand was less about transgender people and more about race and the complicated issues surrounding the color divide in this country. By focussing on transgender issues he was trying to contrast their struggle for acceptance and equality with the Black community’s similar struggle for equality.

However, my fear was that my take on the controversy between Chappelle and the trans community was misguided, and, that due to the fact that I’m a straight white guy, I could never fully understand the depth of what’s happening. Jess is a great translator, advocate, and teacher.

We talked about many aspects of the special and what it means in American culture. The recording is amazing. I’m proud of it. I really recommend you listen to it. But let me recap three major themes that we covered in this conversation.

Why Is Dave Chappelle So Offensive to (Some of) The Trans Community?

I asked Jess to explain why Dave Chappelle is so offensive to the trans community. Or at least give me her informed opinion. She divided the controversy into the three categories.

1.  The first criticism of Dave Chappelle is that because he is not a transgendered person he has no right to joke about that world. He has no idea how difficult it is to inhabit that world and how dangerous it is to be a trans person in our society. Trans people die daily for being trans.

2. The second reason she felt this special is so offensive to the trans community is because Dave Chappelle conflates sex and gender. He acts as though they are synonymous, but she reminded me they are not. Dave Chappelle’s premise when he jokes about the trans community is that it is absurd that you can be a male trapped in a female’s body or vice versa.  He doesn’t deny that it happens; he just points out that the reality of it is mind-blowing for a lot of people.

He poses big questions like what it means to be a woman. Is a trans woman the same as a “real” woman? Are your genitalia the only thing defining your gender?  Dave mentions that being born in a body that doesn’t suit your vision of yourself is, “a hilarious predicament.”

Jess pointed out that if you are really struggling with the complexities of living a transgendered life, many things in this reality are definitely NOT hilarious. So it’s offensive he would suggest that it is.

3.  Jess’s third point is that in the special Dave Chappelle is really commenting about racism and the absurdity inherent there. He especially focuses on white transgendered people and how it’s convenient for them to be identified as white when they want to be. White transgender people still have white privilege that Black folk of any gender do not. I think this last point is fascinating because it’s easily missed. On the surface it looks like he’s making jokes just about the trans community and what it’s like to live as a trans person. But he feels that for white trans and non-conforming people there is an irony that is both funny and needs to be addressed. He is ranking identity and privilege in our society and cutting the layers very thin. This in and of itself is absurd in a country where everyone is supposed to be equal.

Again, listen to the recording. And if you haven’t listened to any of Dave Chappelle’s comedy specials, they’re definitely worth your time.  Hello Netflix!

There is just too much in the special and too much in our conversation to cover in one short article. But there is one very important point I wanted to call attention to: transgendered people and other non-conforming folks live in an exceptionally difficult world that is hard for privileged people to fully understand. Trans people are often victims of violence. They are victims of suicide. Their life is complex, difficult and dangerous, and those troubles are so much more than just punchlines. I was really glad Jess pointed out that we are not just talking about the color of somebody’s hair, the cars people choose to drive, or even who people vote for. We are talking about a key part of a person’s human experience which unfortunately often breeds discomfort, prejudice, and definitely violence.

Did you think the special was funny? Do you think it’s possible to be both offensive and hilarious? Do you feel like Dave Chapelle is really anti-trans?

I learned so much from this conversation. It made me understand more about where trans people are coming from, which I definitely needed.  Jess Pettitt you are a gift!   I’m so lucky we are friends. Thanks for making this conversation special.

Although Brad works for nearly every industry he has a few industries in which he is especially popular. He is a healthcare speaker, and insurance speaker, a real estate speaker, and even a Colorado magician.

Every event is customized and tailored. Give us a call and will brainstorm the best way to help partner with you to make your meeting, convention or event absolutely epic.