Humor at Work: For Science Teachers

Blog - Latest News
You are here: Home1 / Humor at Work: For Science Teachers

One of my best pals from way back when (we both had hair) is Craig Young. Â He left a hefty 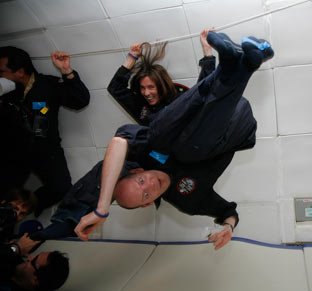 salary by jumping off the corporate ship to follow his passion. Â He was a big deal at Accenture and decided that he wanted more. Â He wanted to be a high school teacher. Â  I speak pretty often…. Craig speaks to high school “audiences” every day.

In Sept. I had a chance to go on a parabolic flight to experience weightlessness – the same type of flights that NASA uses to train astronauts for weightlessness.Â  This week, I finally received the photos and videos from the event.Â  Attached is one of the better photos of me being “weightless”.Â

The weightless flight was a deal for science and math teachers sponsored byÂ Northrop Grumman (a CA defense contractor). Â Their goal is to inspireÂ teachers who can then inspire students to pursue math and science…and turnÂ into nice little engineers working for defense contractors. Â Anyway, IÂ applied in the spring and found out in August that I’d been selected. Â We
got together in early Sept to design some experiments showing the effects ofÂ weightless. Â The flight was on Sept 18. Â It was basically an all-day event,Â but the flight was only 90 minutes. Â We flew out of San Jose over theÂ Pacific Ocean. Â Somewhere in the middle of nowhere, the plane started doingÂ these crazy roller-coaster-like hills – climbing at a 50-degree angle thenÂ putting the engines in neutral and letting Earth’s gravity pull us through aÂ parabola. Â We did that 15 times and got about 20 seconds of weightlessnessÂ each time. Â Â Â It was a phenomenal experience!

My teammates and I had planned only 4 Â experiments we wanted to perform, thinking that it would take a while to getÂ acclimated and to collect our wits. Â I never collected my wits! Â Every timeÂ we went into freefall, I got giddy and could barely concentrate on what weÂ were doing. Â It was such a different sensation than I had imagined. Â We didÂ get our experiments completed but the video I took was a complete waste –Â fingers in the way, pictures of feet, backs, floors, ceilings – everythingÂ but the experiments. Â Luckily, the company had a professional photographerÂ and mounted video cameras so we got some great footage from them. Â As I said
before, if I needed another reason to be a science teacher, that was it.

My students all got 2 days of weightlessness discussion – 1 the day afterÂ the flight and another when the videos came in. Â I also got to keep theÂ flightsuit so I wore that both days to school and on Halloween.

My pal Craig worked hard, made extremely tough choices, and in the end found his passion; Â he’s found his home.Â
Â
I’m proud of him…and am inspired by him. Â  But never more than when he sent this photo.Â Â Â Â Â My point: Are you following your passion? Â Are you making sure that fun is driving you? Â That you are driving fun? Â  Can you find “great reasons” to be doing what you are doing?
Â
Way to go Craig!
Â
Brad Montgomery
Motivational Speaker, Educator, Fan of Folks with Passion
PS. Â I want a flight suit too, but I’m afraid I’d barf all over the place on my way to earning it.
November 22, 2008/0 Comments/in Speakers /by admin
https://www.bradmontgomery.com/wp-content/uploads/2020/08/footerlogo.png 0 0 admin https://www.bradmontgomery.com/wp-content/uploads/2020/08/footerlogo.png admin2008-11-22 21:02:202008-11-22 21:02:20Humor at Work: For Science Teachers