​ Get Your People Out of Their Seats! They'll Never Forget It! - Official Site: Funny Motivational Keynote Speaker Brad Montgomery

Get Your People Out of Their Seats! They’ll Never Forget It!

Blog - Latest News
You are here: Home1 / Get Your People Out of Their Seats! They’ll Never Forget It!

What energizes your group, lifts up the mood, galvanizes action? A FLASH MOB!

What is an The? 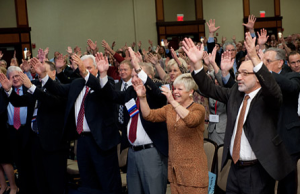 • A Spectacle
• An out of your chair, interactive, team-building phenomena
• A fun, easy-to-learn dance designed to surprise and energize, and teach your group

But We don’t have Enough Time!
• Yeah you do. Brad has done this a lot. He’s got it down.
• Brad has a system to get this thing done in just a few minutes.

But what do we get out of having a Flash Mob?
•Watch your people start smiling and laughing.
•Watch them grab their phones and start taking photos or videos.
•Watch them text their friends and say, “You won’t believe what we’re doing!”
•Takes your meeting from dull and routine to Exciting and Spectacular!
• They learn by experience … not lecture.

Are there any Long-Term Outcomes? Of course!
• Increased Trust

How does this Connect to Laugh-O-Nomics, Brad’s laugh-filled program designed to Connect Happiness at Work to Your Bottom Line?
• People learn better when they are excited and enthused.
• Models Lighthearted Behavior in a Safe and Trusting environment
• Demonstrates the Power of Laughter
• Teaches the Values of Fun and Fun-living (and happiness at work.)

We are too serious, stuffy, & introverted to do this thing. Dance? Not us!” But you’re wrong. Brad has had groups as diverse as the “good ol’ boys” at John Deere, to some a finance group in Ohio to a bunch of insurance salesmen to a smallish leadership team at Country Kitchen Restaurants up, moving, laughing, and enjoying the spectacal. If they did it, you can bet Brad will have your group doing it.

Part of the joy is the surprise…not only of the “victims” but the surprise the entire audience enjoys when they realize what THEY just did. It’s amazing. It’s meaningful. It’s powerful. It’s 100% Brad. 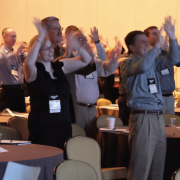 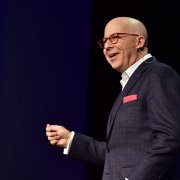 The Best Part of My Job

Is Your Speaking Or Creating Change?

Welcome to the Big Top!
0 replies

Aw Shucks! You Said What?!?? REAL Motivational Speakers Hate Matt Foley & his Van Down By The River
Scroll to top