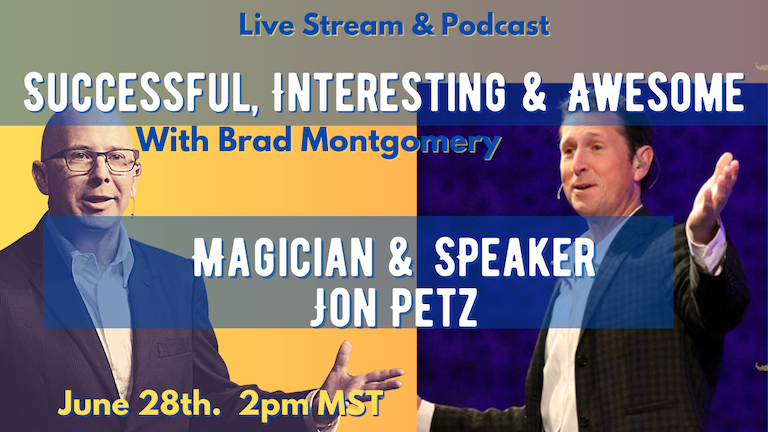 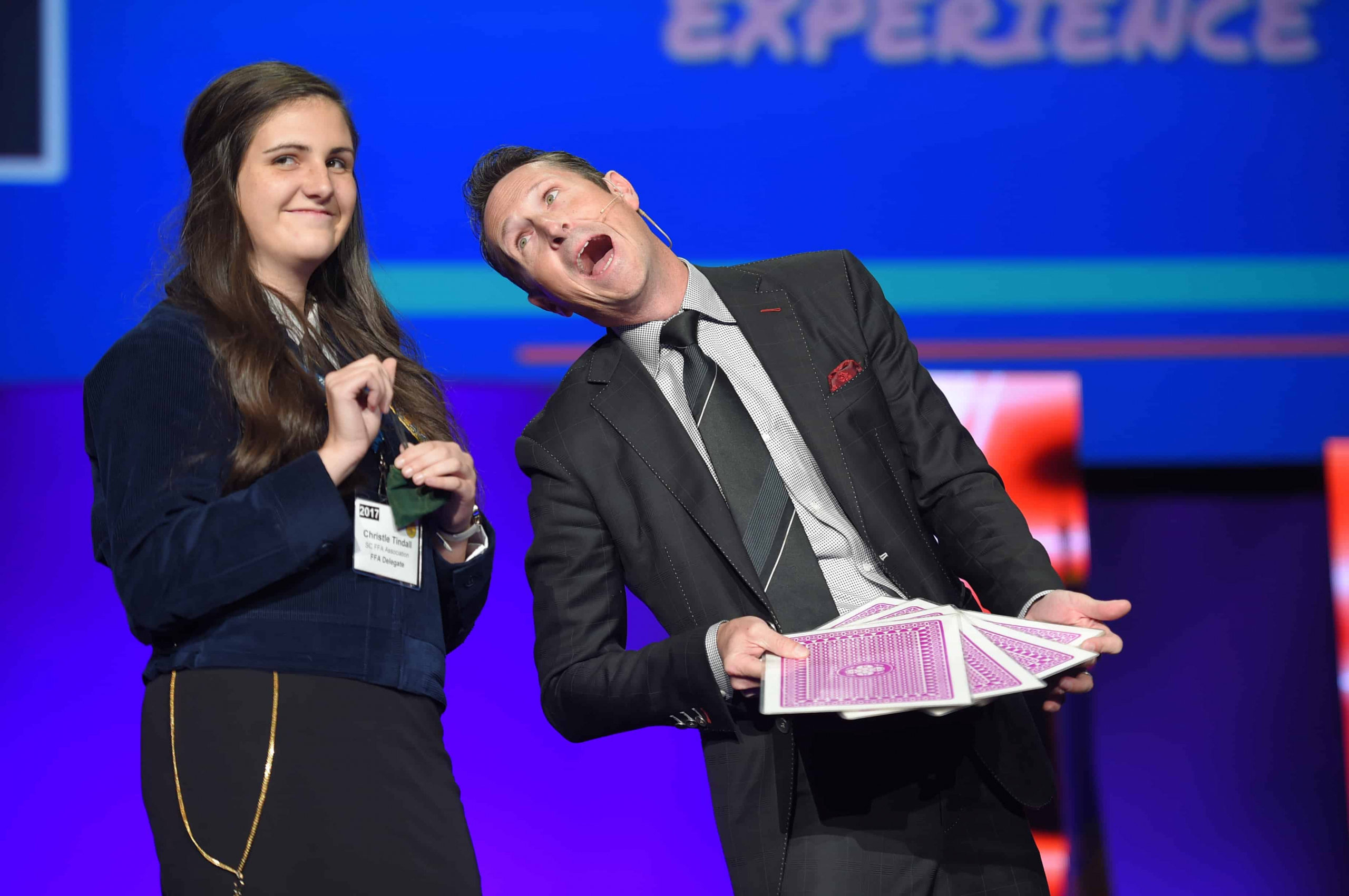 Funny motivational speaker Jon Petz joined me for the podcast today. Jon and I have so much in common. We both work large conventions as both speakers and masters of ceremonies. We both got our start as magicians. We are both funny.  (Well, at least I try to be funny; John actually is funny.)  We have both been in this speaking game a very long time. We are both super good-looking.  No wonder I like Jon so much.

Before I introduced John, I told the audience a little bit about my first road trip and job back since Covid shut everything down.  I haven’t had an out of town, in-person gig since March, 2020.  But this past week I had a live event booked in Orlando, Florida.  Woo hoo!  I got on a thing called an airplane. You might remember them. They fly out of these things called airports.  And then best of all I went to this conference and was put in front of this thing called an audience. Oh gosh I missed audiences! (Still do!)  It was wonderful to be in front of so many enthusiastic faces looking up at me; I teared up.  I really did. It felt special to get to laugh with them. To cheer for them. To encourage them. And to teach them some skills to take back to work. It was fabulous.

But the best part was getting live feedback delivered from the audience directly to me on stage.  Not just the laughter.  But the nodding heads. The hand-raising. And, perhaps best of all, meeting people after the motivational keynote who just wanted to spend some time connecting.  Never will I take that for granted again.  After doing so many virtual keynotes online, most of which have almost zero interaction or feedback, it was an absolute treat getting feedback from a live group. I’d forgotten how much it meant to me.

And because I had just been talking about traveling to do a live program, the first thing we talked about was how we are both starting to travel again. Both of us as professional motivational speakers used to travel all of the time. We talked about having to restock our suitcases with all of the goodies that we need to travel with, like instant oatmeal packets, socks and shoes, matching socks and shoes (I can’t tell you how many times I’ve rushed through packing and ended up with only one dress sock, or two mismatched dress shoes, or one time I even forgot my sport coat).

Anyway, Jon and I talked about spraying down hotel rooms a few months ago with Clorox and handy wipes.  And he shared a hack which basically means he confessed to putting the remote control in a plastic bag so he never had to touch it. Nice one. I’ll be using that.

We also spent some time talking about handshakes. I told him that at my recent job a lot of people wanted to shake hands, and it still feels a little startling. I’m vaccinated and feel comfortable and safe shaking hands. But I also really enjoyed not having a cold for sixteen months and wonder if our social distancing and lack of handshakes were part of this.

I asked Jon about how he got into the motivational speaking biz.  He had been a magician for some time, but as a young man, he was working in the corporate world. He said he had the perfect job, sort of a dream job, and was killing it even by his early thirties. But he knew we didn’t want that. So with a deadline of 6 months he set out to start a speaking business. I was crazy impressed because he was able to kick start this thing before his deadline expired.

To me this was the crux of the interview.  The speaking business is a very challenging business.  It takes time, persistence, a little bit of talent and a lot of hard work to develop a motivational speech worthy of audiences and to develop a marketing strategy to reach those audiences.  I can’t tell you how many people I know who have tried to be a speaker and after some period of time, months or even years, they quit to get a real job.  To me the mistake is that they think they’re going to quickly build a business in a few months.  For most people it takes years.  Most people quit before they get there.

Not Jon.   He was able to apply his very clever brain, insane sales skills, and the ability to work really hard to growing a speaking business from the ground up. This makes him a very talented magician. It makes him an excellent speaker. But it also helps him to put dates on his calendar.

So although it was surprising to me that he was able to get his business started so quickly, in many ways this was pure Jon Petz.   This guy is just good at life, and he has the intensity and drive to make very difficult things look easy.

Another highlight of  the conversation was when John told me he worked at a Comedy & Magic nightclub recently. It was basically a small room filled with people who really wanted to laugh.  After being away from live entertainment for so long, people were ready to let loose.  It was fun hearing how Jon enjoyed his set as a pure entertainer after such a long break.

This is another thing we have in common. I also had a fairly recent experience where I was booked as an entertainer, not as a speaker. It was totally great to not have to worry about educating an audience, sticking to a strict time schedule, or having to follow a specific form in order to make sure all of the information was delivered.  As an entertainer your only job is to entertain. If the audience is laughing, you’re doing great.  As a speaker you’ve got a few more balls in the air. I don’t think it’s harder to be a speaker, I’m just saying that being freed of a specific topic is really fun.

And really, isn’t that why we all get into this business of motivational speaking anyway—to have fun?  There’s nothing like the pure joy you can get from being on stage and really connecting with an audience, whether it’s as a speaker delivering an important inspirational message, or whether it’s as an entertainer, simply trying to wow and delight an audience.  When we speakers and entertainers get to share time together and talk about performances, audiences and how lucky we feel to be in the business, it’s a blast.

There’s a cliche that you’re the sum of the books you read and the people you hang out with. It’s a cliche because it’s true. I’m lucky that I’m friends with Jon Petz.  He’s a very good man, he’s a fantastic performer, and he’s a wonderful business person. I feel lucky to have the chance to hang out with him.

Jon!  Thanks for joining me.  It was a hoot.  I’m proud to be your friend.

Bio of a Motivational Magician Speaker

Magician speaker and funny keynoter Brad Montgomery is also a corporate emcee.  He has experience speaking for nearly every industry, but is especially well known for his work as a health care speaker and speaker for educators and teachers.  But he also has many clients as a real estate speaker, sales speaker, and leadership speaker.

He got his start as a magician comedian, but now speaks to corporate, health care and association audiences.  Most commonly he works live and in person, but recently has enjoyed working as an online virtual speaker.

Based in Denver, Colorado, Brad speaks around the globe and in all 50 states.

Dolly Babb: A Leader Who Personifies The Business Value of Humanness and Empathy...
Scroll to top Scroll to top