Flash Mob for Hire! (Comes with a Motivational Speaker?)

Blog - Latest News
You are here: Home1 / Flash Mob for Hire! (Comes with a Motivational Speaker?)

eting if your audienceÂ couldn’t WAIT to start the learning? Â What if your audience was sending photos and videos BACK to their co-workers bragging about what they are doing?

It would mean that your hum-drum meeting would be a wild success. Â And I have just the thing for you: Â a flash mob created INSTANTLY just for you and your organization.

It’s new. Â It’s fun. Â It’s high-energy. Â It’s interactive and hands-on. Â And it will move your meeting or convention up to an “11.” Â  (Who knows what that movie is from?)

Ready to hire a flash mob for your event? Â Who needs a flash mob company? Â Hire funny motivational speaker (and happiness expert) Brad Montgomery to make it happen for you and your team. Â Trust me…this experience will be remembered and talked about LONG after the meeting is over. 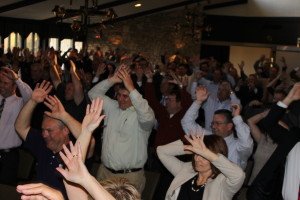