A team leader’s job is hard work, and it’s even more difficult figuring out how to make those under you follow you. The most common trap most struggling leaders fall into is exerting power and influence over their subordinates in an attempt to have them follow without question.

This is not only ineffective, but counterproductive as well because the people you manage will see you as merely an authority figure instead of someone they’d want to follow. If you want an effective leadership style, you should start leading by example.

Motivation and the Power of Leading

The Chinese military general and strategist Sun Tzu wrote in his book, The Art of War that “a leader leads by example, not by force.” You’re not exactly fighting invasions in the office, but there’s no denying that the workplace can be a battleground if you don’t know how to lead your subordinates.

Leading by example is the simplest and most effective way to get your people to follow you and like you at the same time. They’ll respect someone who can get things done without having to resort to commanding their subordinates, and it motivates them to do their own work properly and efficiently. They also feel more at ease with you and won’t see you as an authority figure that they need to fear to respect.

An important part of leading by example is being open to criticisms, especially from the people you manage. This may be off-putting to some, but remember that the difference between you and your ‘subordinates’ is that compared to them, you only have more responsibilities.

Your status as a leader shouldn’t give you any reason to ignore your weaknesses and potential failings; in fact, you should be more open and accommodating to feedback. The people you manage know from experience the qualities you may lack that you may be unaware of, so make sure you establish a quality of openness.

My name is Brad Montgomery, and I know how difficult it is to become an effective leader whom the people you work with will follow and respect. Contact us today to learn more about our motivational talks that will help you lead by example. 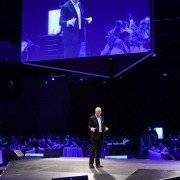 The Psychology of Motivation

Feedback is All You Need to Improve Employee Productivity

‘Pay’ It Forward: Motivating Employees Beyond Bonuses and Money

Growing as a Leader in the Single Most Powerful Way