I mentioned in my last post that my wife and I went to a Colorado comedy club and were totally unimpressed by the three opening comedians. Here’s the rest of the story:

We were saved when comedian #4 arrived. The headliner. (I admit, I didn’t know him.) I swear, my wife and pals and I sighed happily when after only 25 seconds of this guy, we realized we were with a total pro. (We were relieved that this trip to the comedy club wasn’t a total bust.)
For the first third or even half of his show, he worked pretty clean. He is black, and got a ton of milage about jokes about him hanging out with his white friends. He did a great imitation of white, suburban, country club white people. And the contrast between that voice and his normal speaking voice was really funny. 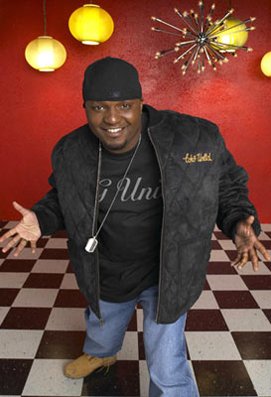 Then he started to work more blue. And he eventually got really blue. But this time we laughed. With this comic, we were willing to crack up. Why?

Because we liked him. The first three comics came out filthy, and it just didn’t work because we didn’t know them or like them. (My wife will never like they guy with a family AND a prostitute… but you get my point.) This last comic earned our trust and admiration, and only after he earned us did he take us on to the bluer topics.

When we left he comedy club the line for the second show was all the way around the block. It was only then that we realized we had seen somebody famous. (Are we the only people in Colorado who haven’t heard of this guy?)

Aries Spears is his name. He was on Mad TV and some other stuff, and was practicing for (what I think) is a Showtime Comedy Special.

Well… it was news to me. But I wasn’t surprised… he was great. (Note to the Coomedy Works: He deserved some way better opening comics. Those openers hurt more than they helped.)

One one final note to any of my corporate comedian clients: Aries was WAY more blue than I’ll Ever work. In the corporate world, I work clean… crystal clean. I’m not saying that dirty or blule humor is or is not my bag… I’m just saying that Aries was a pro at knowing when and how to use it. He was funny.

Thanks Aries…. you rocked.

Need a clean corporate comedian or comedian speaker to visit your company or association? Visit my Official Website here.

Naked People Make Us Laugh The Blog is Famous! :) Well, sort of…
Scroll to top