I’m just now back from Orlando, Florida where I spoke with about 950 members of the Air Force Sergeants’ Association. I love working in Orlando. And I love working with military audiences, but this group was a total hoot.

There were a long list of highlights. Here’s a few:
â€¢ Immediately before my program I ate with (among others) Chief Master Sergeant of the Air Force Rodney J. McKinley.

He’s a very relaxed, very charming, and actually pretty funny. We spoke of many things, but when I asked him if uses humor in his position as a leader he was instantly animated and spoke of how he believes it relaxes his folks, makes him appear “more human” and less intimidating, and more relaxed. In other words, it’s a big deal. And so was he. 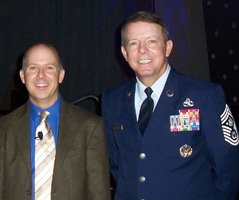 [Later, he flattered me by giving me his Military Coin, which is a TOTAL rush. Thanks Chief McKinley.]

What impressed me most with Chief Master Sergeant McKinley was the fact that he is a skilled practitioner of humor. he has a total natural and authentic gift for making others feel at ease. He pokes fun at himself, and his staff clearly responds to his authenticity.

It never surprises me when the most down-to-earth folks turn out to be the top dogs. It might be the very fact that they are leaders that enables them to “let their hair down” and e relaxed and at ease, and able to make those people around them comfortable and relaxed.

But I suspect it is the opposite: I suspect that the more “at ease” people are with themselves, the more likely it is that they end up in leadership positions.

Thanks Air Force Sergeeants Association. I had a total ball being your humorist motivational speaker.