I’m just recently back from doing my motivational speaker thing for the lunch ladies of New York state.  Yeah, they had a fancier name for their association, but heck, they apparently love the name Lunch Ladies.  (Which was especially funny because there are plenty of dude “lunch ladies.”) 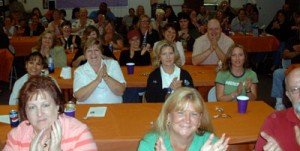 Check out the evaluations they sent….Yippee!  They had as much fun as I did.

….Yes, I’ll send a letter of recommendation. But I can do better than that- I just received the attendee’s comments from Carol in Albany, and will pass those along for you to use as we are VERY SATISFIED customers!!

“Saturday morning with Brad Montgomery was the best part of the Conference!”

“Blowing Things Up with Brad Montgomery was my favorite program at Conference- VERY motivating!!”

“It was so much fun to listen to (and participate!!) with Brad Montgomery. He is not your typical, (sometimes boring) Conference speaker!!”

So… needless to say, we were so happy YOU were able to join us and contribute so much to our NYSNA Conference 2012 in Niagara Falls!!!

THANK YOU again, Brad-
Judy
Looking for a motivational speaker for your event? Contact me here. 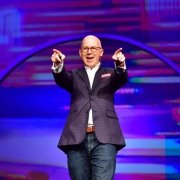 There are a few organizations that are close to my heart.  Diabetes because my 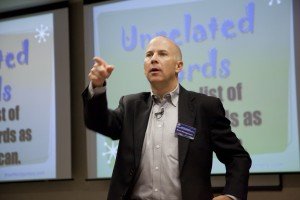 daughter is a Type 1 Diabetic  Alzheimer’s because it took my mom when she was young.  And hospice because both my grandmother and my mom saw the amazing benefit and power of hospice.  (As did my family…hospice helps the survivors too.)

I recently got to speak at a health care conference for hospice and palative care folks in my home town of Denver, Colorado.  It was a hoot.  They gave so much to me and my family a short time ago, and it was a TOTALY honor to give just a teensy bit back to them.

I loved them.   Happily the feeling was (at least sort of) mutual.  Check out this nice letter.

Brad Montgomery
Brad Montgomery Productions
Dear Brad,
WOW!
As a seasoned meeting professional, I have never participated In a keynote presentation quite like yours.

It was truly spectacular! The Colorado Center for Hospice & Palliative Care Fall Conference was brought to a close with your uplifting, funny, lively, engaging presentation and we are so grateful to you for that!
On behalf of the Education Committee and the Board of Directors, we want to thank you for your gift of the closing keynote presentation for our conference. It was truly special and greatly appreciated by all.
You made it crystal clear that happiness and laughter have a place in the working world of hospice and palliative care. If we can’t share it with those around us and those we work with, we are doing a disservice to all. You spoke of giving back to the hospice community and I can confirm that you have done that and so much more…
Kindest regards,
K. Smith
Colorado Center for Hospice & Palliative

Looking for a health care speaker who knows how to connect to your audience?  Who is funny? Not just sort of funny but REALLY funny?  Who can help your people be their best?

Think that being calm is over rated?  With all the search for tranquility, hunting for your Zen, and looking for peace and quiet, is there anybody out there with concrete ideas about how to act on the way to our happy place?   How do we appear calm when we are not?

The Chicago Tribune writer Heidi Stevens called and asked me for some tips for How to Fake Being Calm.  I was thrilled when they published my article.  They wanted  tips for appearing cool, calm and collected, even as our hearts and minds are racing.  It was fun to write, and (with permission) here it is for you.

1. Find something to do with your hands.  When we’re freaked out, we don’t eat, tie our shoes, or sharpen our pencils.   We cease to do pedestrian things tasks.  Therefore, if you want to fake being calm, look for something boring to do.    As a professional speaker, my clients often are shocked to see me eat before a speech.  They think, “Look at him!  He’s as cool as a cucumber — he’s eating pot roast!”  Next time you need to fake calm, let them see you casually do something boring.

2. Ask questions about the boring details.  If somebody asks you to jump out of the plane and you want to appear calm, ask them about inconsequential details.  “What color is the plane?”  “Is there a beverage on the flight?”  “Is Larry still flying for that outfit?”  When you go for the details instead of shouting, “But I could kill myself!”  or “How do I know the parachute will work?” they’ll never know you’re a faker.

3. Use the cliche and you won’t need to fake it: “Will this event matter in five years?”   The answer is nearly always, “no.”   Next time you’re craving some calm, ask yourself about the long-term consequences of whatever is bothering you and there’s a decent chance that you won’t even need to fake finding your inner Zen.

4. Sometimes we need time to hide before we can be good fakers. Next time you’re faced with something alarming, excuse yourself with some casual phrase like, “Oh, that sounds fascinating!   But can you give me the details after I use the restroom?”  Hide in the restroom, get yourself together, and come out ready to fake serenity.

5. Ask the question, “What did you learn from that?”  When presented with a crisis, casually ask the messenger this question and let them talk.  And they will.  Give knowing nods and casual,  “Hmmms” while they go on and on.  While they are talking, you’ll appear calm while you figure out a way to be calm.

6. Ask yourself, WWYD?   What would Yoda do?  This works for two reasons 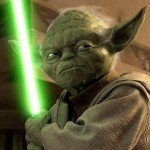 — has anybody been cooler under duress than that little green dude?   Learn from your inner Jedi and copy the Master.  Second, it’s such a silly concept — using a puppet as a role model — it can’t but help deliver perspective to whatever seems like a calamity.   Act calm…. it is your destiny!

Brad Montgomery is a funny motivational speaker and who makes business meetings less boring .  Learn more about how he fakes calm at https://www.bradmontgomery.com//

Thanks Tribune.  It was fun being part of your team, even for just that issue.

Do you need a motivational speaker for your event and are freaking out?  No need to fake calm;  just contact us here and we’ll help make your meeting a success.

Here’s some not very surprising news: turns out when social scientists study what impact a person has on a team, a negative person has a negative impact on the group.

This means if you add a negative person to your team, Negative Nellie Olsen is able to pull the team down. Remember Little House on the Prairie?  Laura never would have gotten in half the trouble she did, but for Nellie Olsen. Nellie’s negativity managed to ruin all kinds of things for Laura, until Pa put her straight. (How many think Michael Landon was a stupid casting choice for Pa? Where’s the beard?  Where’s the twinkling blue eyes? And what’s with the California salon tan and the permed hair? I know, I know, he was the producer, so he got the starring role. But still…)

Anyway, the opposite is also true. The addition of a positive person to the team brings the whole team up. Positive Pollyanna is a winner! A young girl, Pollyanna Whittier, brings an entire town in Vermont to gladness. If you don’t believe me, read the book or see the Disney movie. (Pollyanna, by Eleanor H. Porter, pub. 1913; Disney film, released 1960, starring Hayley Mills. (Don’t you just love Hayley Mills?  The Parent Trap; The Flame Trees of Thika. I thought she was in Born Free, but that was someone else. Don’t you just love the internet? No wonder it takes me so long to write these blog posts.)

One small bummer—apparently Negative Nellie has a greater impact on the team than Positive Pollyanna does. I don’t know, though. I think Pollyanna could take Nellie Olsen in a smackdown. Nellie is a wuss!

So who do you want to be? Optimistic yet tough Pollyanna? Or whiny, wussy Nellie Olsen? What impact do you want to have on your organization? On your marriage, family, work situation, wine club, or swim team? All are organizations, all are teams, and all are affected by Pollyannas and Nellies.

The way I see it, is you have three choices:

So ask yourself this question: What can I do to make myself a Pollyanna? How can I make my workplace a happier place. Or my family-life happier? Or my life in general?

You know, Pollyanna’s are often viewed pejoratively (now isn’t that a $100 word), meaning that it’s not a complimentary term. “Pollyanna” often refers to someone who’s blithely naïve or unconcerned about just how drastic the particular situation is. But if you look at the original Pollyanna, she’s not this way at all.  Pollyanna decided to be someone who had a positive outlook. She played a game called “The Glad Game,” taught to her by her father, where she would try to turn the most depressing situation into something positive. For example, as a gift she received a pair of crutches (a really crappy gift), but turned it around by finding the good side—how glad she was not to have to use them! 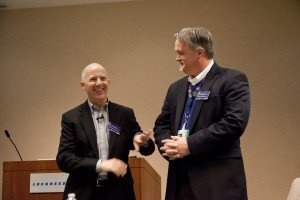 Okay, it seems a little corny in today’s hurly-burly, modern, seriously screwed-up world. But guess what? The world when Pollyanna was written was seriously screwed-up also. It was the eve of World War I. People were uncertain and unsettled. Financial crises were common, money was tight, and recession a reality. Sound familiar?

The problems of today are, frankly, the same problems of yesterday, just the gift-wrap is different. That’s why it’s more important than ever to be a Pollyanna. Make it a conscious choice, like Pollyanna did. Be honest about which accidental group you belong to. Don’t be a flatliner. Especially don’t be a Nellie Olsen, and responsible for locking your group, your family, your workplace in the cellar of misery. (That was a cool movie too—Misery, based on the Stephen King novel. Hayley Mills wasn’t in it.)

Decide to be Pollyanna and lift people up. Call yourself a balloon, if you don’t like calling yourself a Pollyanna.  (Although it’s going to be kind of weird trying to explain why your name-tag says, “Balloon” on it.  Come to think of it, it might be weird answering to “Pollyanna” also, especially if you’re 6’2” and sport a mustache.)

So be a balloon. Choose Pollyanna. Soar with the eagles. Don’t be a Nellie Olsen. Avoid flat-lining. Or think up your own metaphor. You can do it!

Book Brad—He’s a happiness speaker. More importantly, he’s a Pollyanna. If you’re looking for  motivational speaker who speaks about happiness and who gives specific tools and strategies for boosting your psyche, then consider Brad Montgomery, Pollyanna, helium balloon and a genuinely fun and funny guy. He’s the only happiness speaker he knows.