As I write this post, I’m sitting in United seat 7F on the way back from speaking for the Senior Acquisition Leaders event in Atlanta, Georgia.

What can I say? Where to start?

They flattered me with a standing ovation. Which, coming from these hardened career military folks was flattering. Apparently they thought it went well. And I’m glad. Very glad.

But what really stood out for me was what a special time I had. I was absolutely thrilled to be part of the event. There is something special about working for the military. I’ve done it a few times before, and it is always special. And this speech and that crowd absolutely touched me.

I love speaking to corporate groups… they are good people, hard workers, and I’m convinced that they really need a message of lightness and fun. But working for the military is a whole different beast because they are passionate about their jobs. Passionate. They have a call to serve, and their amazing attitudes are infectious. 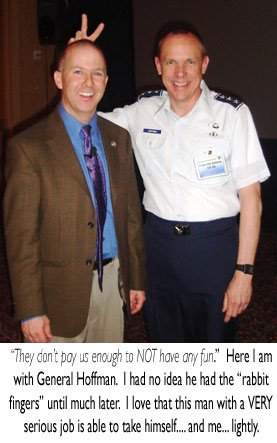 before my program that, “They don’t pay us for us not to have a good time.” General Hoffman is a fun, upbeat leader who strongly believes that we need to take ourselves less seriously — especially perhaps those people in such serious jobs as the Air Force.

“Don’t get me wrong,” General Hoffman continued, “This is a serious job. We make planes, drop bombs and kill people. We’re not all fun and games. And we’re not in this to make people laugh.” But he went on to say that if you are that stereo-typical all-serious military guy you burn out, your people burn out, and you never get the results you are after.

I loved how he made the distinction between having a sense of humor and being funny. I totally agree: you don’t have to make jokes and tease people in order to lighten the workplace. Humor in the workplace doesn’t always mean (and sometimes should NOT mean) laughing or making others laugh. But it always means being about to take yourself a bit lesseriously. It means having and using a sense of humor yourself.

Wow. Humor in the military? Humor in leadership? Humor during a time of war? You bet, if you believe this general. And the most wonderful thing is that his attitude and leadership strategy is obviously working — just look at the three stars on his shoulder.

General Hoffman… it was an honor to speak to your group. Thank so much for including me.

(Follow the Air Force’s Lead… book Brad to be YOUR funny motivational speaker.)

There is a Bad Boss contest… this is a contest that you don’t want to win. Humor in the workplace is just one of the ways you can be a better leader, manager and … er… boss.

But while you’re working to improve your managing skills, you might as well read about some of the worst bosses in America. Look at this cool site, and look at this fun excerpt:

BadBoss – My Bad Boss Contest
Heart of Stone
I had been working in a grease factory. The bosses were heartless and treated the workers like scum. My job was evolving into a supervisory position, and one of the bosses was giving me special training one day when we got word that there had been an explosion in the factory. It was frightening news that an employee had just been badly injured and might lose an eye. We were hurrying down the corridor on our way to the accident site when my boss stopped suddenly for a moment and carefully instructed me: “Remember when we get there, you’ve got to act like you care.”

Check out my humor in the workplace seminars and keynotes here.

I love victimless, safe practical jokes. And I love playing in the workspace, and on the job. But most of all, I’m a fan of staying employed, and avoiding getting fired.

Good news, fun seekers… you can do all of that and more if you select the right types of practical jokes.

Here is a great way to freak out your friends and family — that can also be safely taken to work.

Secretly put an uncooked piece of pasta in your mouth. Those little “Pasta Elbows” work great for this gag.

Now find somebody close to you (friend, spouse, boyfriend, whatever!) and ask them to help you crack your neck. Explain that you can’t move your neck as you normally can and that you need their help in fixing it. They won’t know what you mean exactly but that’s just fine. Have them stand behind you as you sit in a chair. Direct them to put their hands on your head and help you to GENTLY turn your head.

With their hands on your head and your hands on their hands, slowly turn your head. While you are turning your head, bite down hard on the pasta elbow. They’ll feel the crunch through your skull.
Now you just say, “Thanks! That is so much better!” Freaked out is an understatement.

Want to avoid practical jokes but still need humor in the workplace? Why not bring me in to be your motivational comedian?

I need your help.

The truth is that I’m not certain what it is that you want from this blog (and my e-newsletter.)

I’ve developed a super-simple survey that will help me to GIVE you what you want (and help you to GET what you want.)

And it will take you less than one minute.

Here’s the link to the survey.

What’s in it for you? A couple of things.

First of all, you’ll be helping me. Helping me a ton.

But second, we will pick one person from all of those who fill out the survey and will give them a copy of my ebook, Humor Me: America’s Funniest Humorists On the Power of Laughter.

So… here’s the link one more time. Click here, and you’ll make my day. (And you might earn a free book.)