Think this thing could create a stir in your office? Need some humor in the workplace? Boom! Read on…

Travel Gadgets | Travelizmo
The sonic grenade will wake you up

When I first saw this bad boy I thought first of the fire drills we used to have in the dorms at the University of Arizona. Man they where loud and there was no way to sleep through them. The Ear-splitting “sonic grenade” brings out the same affect. Simply pull the pin, and launch the grenade into the target’s room. In ten seconds a very annoying and piercingly loud noise (one of three volume settings) will blast out from the alarm. The best part is that to stop the alarm the sleeper has to find you so you can put the pin back in. Now that’s annoying. A great prank toy or a great travel gadget for getting your family going on those early mornings no one wants to get up. Pick one up for $16.

Read about what I do for groups looking for more Humor in the Workplace here!

A flight attendant asked me, “What do you want to drink, darling?”

I joked about my middle name being Darling, and how in the world did she know that?

We laughed a bit. She gave me some water., pushing her cart down the aisle. “ See ya later, Doll Baby.”

I laughed out loud.

Get it? My point is that she used a bit of humor and fun and used it to connect with this plane-load of passengers. She used humor and made OUR day more fun.

Why would she do that? Because it made HER day more fun.

Need some humor or motivation for your humor – in – the- workplace-challeged group?

My family was with me as we sat in our mini-van (ooh, the sexy life we live!) waiting at a stop light. Next to us was a 55 or so year old couple in a REALLY fancy sports car.

“What makes you say that?” I asked. I thought he’d talk about their car, or their facial expression or the fact that they weren’t talking to each other.

“They don’t have any kids to make them happy,” answered my first grader.

I was the proudest of papas. Check out my eldest child, 8 yr. old Claire at her piano recital.

I was proud; rediculously proud. Being a parent is fun. 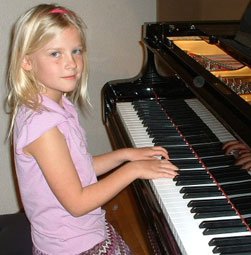 See more about my family.

What this has to do with Humor in the workplace? Nothin’…. but it sure made me laugh.

I’ve been experimenting with my kids — with the connection between laughing and crying. Between humor and sadness.

When they cry, as all kids do, over something I determine just isn’t that important, I have been tying to make them laugh.

It amazes me that they are EASY to make laugh when they are crying. They have convinced me that laughing and crying are nearly the same in so many ways… just because it is so easy to switch from one to the other.

(‘Course my kids are getting tired of it, but hey? If your dad can’t torment you, who can?)

Up and Away… Contract THIS!

I just spoke in Florida to an Air Force Contracting group… the folks who do the buying for our men and women in blue. Great group of people.

After talking to them after my speech it seemed to me that they could give a Short Course in Humor in the Workplace. They do it all the time… it is practically institutionalized.

For example, they have a Sponge Bob frisbee. Whenever one of them makes a goof, (or does something silly or embarrassing) they all yell over the cubicles that “Marcy” or “Bill” has now got the frisbee. And they send it over to their desk.

The effect? It allows them to laugh, instead of cry. It helps make them a better team (’cause they like each other and enjoy laughing with each other).

The frisbee is something you’d rather avoid. But it is like being teased by your best pals… it sort of makes you feel like one of the group.

Way to go folks. Humor in the workplace? Yup, if you work for the 16th Special Operations Wing!

More information about my seminars and keynote speeches about Humor in the Workplace? click here.

I just got off the phone with Lousiana Motivational Speaker and Humorist Bruce Wilkinson. (We’re working on a project for Humor Us about his experience with Humor and Hurricanes.

He told me that Burger King had (a month ago or so) a note on their sign looking for workers: $6000 signing bonus.

Down the street, McDonalds has a sign saying, ‘$50 siging Bonus.”

I migh be crazy but I’d go with Burger King. Sure, there might be huge difference that makes the McDonalds’ bonus attractive, but when you just put that $50 sign up you look stupid. For example, they could put up a sign that says, “Signing bonus… inquire inside.”
But if they did that… it wouldn’t be funny. :)

Check out this amazing quote from magician Doug Henning (whom I loved when I was a kid.)

“Wonder is very necessary in life. When we’re little kids, we’re filled with wonder for the world — it’s fascinating and miraculous. A lot of people lose that. They become cynical and jaded, especially in modern day society. Magic renews that wonder.”

I am a bit jaded sometimes, but I think this magician had it just right.

Check out my work as a corporate magician and motivational speaker here.

My seven year old kid, Ben, just (out of the blue!) told me that,

“I think there must be a lot of pencils in Pennsylvania. “

How far do YOU need to look to find humor?

Here are some photos of my cute, little humorists!

I had two flights in a row cancel on me trying to get out from my funny motivational speech to the Air Force in Florida. It’s easy to get grumpy when that happens. In fact, it is hard not to spiral down in to a pit of misery. : )

But it is even harder when you are surrounded by negative people. There were dozens of angry people… people who had missed important meetings. People who thought Northwest Airlines was out to get them. People who were angry because. this… and that… and…. and….

Usually, I can just physically leave these people. But when you are all crammed into a tiny airport waiting to hear announcements it is pretty hard to do blow them off.

I tried something that made me feel better: I actually got out my pen and wrote a list of things that I was thankful for RIGHT NOW. (Yes, I did feel like a bit of a geek, but hey! What else is new?)
I am healthy.
I have enough money to buy food.
I have a great book with me that I just started… and probably won’t finish even with these long delays
I have a great job. Yes I hate these delays… who doesn’t? But at least I love my job.

(Yes, I did feel like I was in the middle of a Chicken Soup for the Soul book.) Still, I gotta say it did make me feel better… A little.

But then, about 35 min. later something cool happened: a woman from the Air Force recognized me from the keynote speech and came to thank me. And to tell me that my message of hope meant a bunch to her. And that she hadn’t laughed so hard in way-too-long.

Yup, life gets hard. And if you travel… some days are downright yucky. But I still love my job. I l0ve being a comedian. I love being a motivational speaker.

(But I don’t still don’t like Northwest Airlines much. :)